The Organ of St Machar’s Cathedral 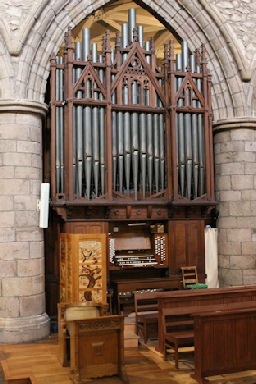 Nothing definite is known about organs in St. Machar’s Cathedral before the Reformation. However, in an account of Bishop Gavin Dunbar’s arrival at St. Machar’s in 1519, Hector Boece relates ‘whenever he [Dunbar] entered the church he was greeted by the sweet harmony of voice and organ.’ The Cathedral would therefore appear to have had an organ of some kind or other. Considering Bishop Elphinstone’s arrangements for the music of ‘twenty Vicars Choral, two Deacons, two Subdeacons, two acolytes and twelve singing boys’ (decree of 7th. May 1506), it seems inconceivable that there would not also have been an organ of similar generous provision.

In recent years there has been a rethink of what type of organ this might have been. The use of the organ in alternatim with the singers would have been one of its main functions. Recalling that Bishop Elphinstone had lived in both Paris and Louvain, and considering the well established medieval Blockwerk tradition in continental organ building (producing a very loud sound), it seems highly probable that there would have been a magnificence about the organ in St. Machar’s. Ideas about the organ having been a small, portative instrument, which had currency some years ago, are now seen as rather unlikely. However, as there is no surviving evidence in the building, we can only surmise by reference to other contemporary sources.  These include the Chapel of Elphinstone’s University, just down the High Street. In King’s Chapel there seems to have been an organ which warranted its own gallery, situated on the south side of the building. This is likely to have been an instrument of considerable size and power.

At the Reformation, all use of the organ in worship ceased and it was not until as late as 1863 that after much controversy, organs were once again allowed a place in the Church of Scotland service. Acceptance was initially slow, and St Machar's was quite in the vanguard when the acquisition of an organ was first discussed in 1880 as part of an ambitious restoration scheme for the building. This scheme did not come about, but finally in 1889 an Organ Committee was established and fund-raising began.

At the Committee's very first meeting it was proposed to approach the renowned firm of Henry Willis & Sons, London, 'acknowledged to be the leading organ builders in the kingdom', whose instruments grace the majority of Britain's cathedrals and a great many of its churches and concert halls. A quotation was also requested from the well-respected Hull firm of Forster & Andrews, but it was with 'Father Willis' that the order for the organ was placed in June 1890. Much discussion was still taking place as to its siting. Delay resulted when a favoured location at the end of the North aisle proved impracticable, but in late August 1891 the organ arrived and was set up in a rather dominant position in front of the present East window's large Victorian predecessor. The instrument was inaugurated on 25 September 1891 and was immediately recognised as being of outstanding quality.

Built at the same time as the organs for Exeter and Hereford Cathedrals, the St Machar's organ then consisted of two manuals and pedals with provision for a substantial unenclosed Choir department, a pedal Ophicleide and a Swell Vox Humana, all of which were added by Willis in 1898. The action was Willis' patent tubular pneumatic. In its original form the organ served well until 1928 when, having deteriorated badly, and with the building's interior about to undergo extensive restoration, it was taken down and completely rebuilt by Messrs Rushworth & Dreaper, Liverpool. On completion of the building it was re-erected in its present location in the North aisle, in more or less the siting that had originally been envisaged for it.

A modern drawstop console and an excellent new supply pneumatic action were fitted. The Choir department, in accordance with contemporary fashion, was placed under expression and the Swell Bourdon was transferred there, also appearing on the Pedal at 16 and 8 as the organ's first really soft bass stop. Its place on the Swell was taken by a double reed. In this form the organ remained until 1956 when in the course of cleaning and overhauling by Rushworth & Dreaper the Swell Vox Humana gave place to a 3 rank Mixture and the Pedal received the addition of open wood extensions at 8 and 4 (since removed).

By the end of the 1960s the organ was once again becoming mechanically unreliable and in 1973 its second major rebuilding was undertaken by the London firm of Noël P. Mander. A new console was provided, retaining and refurbishing the original Willis keyboards. The pneumatic actions gave place to electrics, the Swell received a Clarion and new upperwork, the Pedal department was made more suitable for present day requirements, and the Choir, once again made unenclosed, was partially remodelled. Further additions to the organ remain provided for.

In 1991, following cleaning work on the building's interior, the organ was cleaned and overhauled once again. This work was carried out by A. F. Edmonstone of Perth in whose care the organ has been for many years and who renewed all stop switches and fitted a solid-state piston system in 2001. 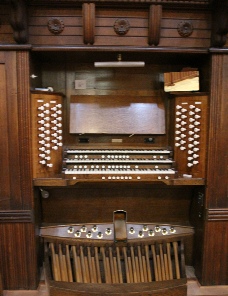 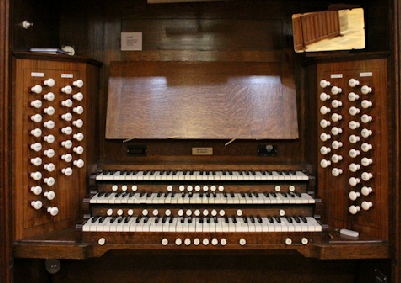 In 2018 when the cathedral was closed for some building works, three ranks of Willis pipes dating from 1898, that were stored in the organ, (Dulciana 8, Claribel Flute 8, and Concert Flute 4) and had been replaced by three Mander ranks in 1973 (Principal 4, Fifteenth 2, and Cymbale 26,29,22) were reinstated by Harrison & Harrison  This has restored the character and variety of the Choir organ as envisaged by 'Father' Willis.  The Mander pipes are now stored in the organ case.

This article is drawn from booklet 'St Machar's Cathedral, Old Aberdeen - Its Organ and Its Music' by Michael Thomson and David Murray, available from this site. (see shop page)

Canceller for each manual