The Bells of St. Machar’s Cathedral 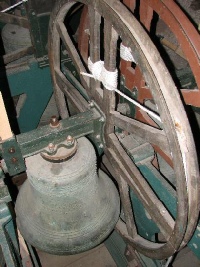 St. Machar's Cathedral is one of only a handful of churches in Scotland containing a set of bells hung for change ringing. Its eight bells were cast between 1906 and 1911 by Mears & Stainbank for St. Stephen's, West Ealing, London. Thirty-three peals were rung there between 1911 and 1977 by members of the Ancient Society of College Youths, the London County Association & North Southwark Diocesan Guild, and the Middlesex County Association & London Diocesan Guild.

The church was declared unsafe in 1979, and the bells were removed for storage. They were acquired by the Cathedral and, after refurbishment by Eayre & Smith, were installed in the south tower in 1987. Since that time, sixty-eight peals have been rung on the bells by members of the Ancient Society of College Youths and the Scottish Association of Change Ringers. The one hundredth peal on the bells was rung by members of the Scottish Association in September of 2000 to commemorate the rededication of the Cathedral's sanctuary cross.

The particulars of the eight bells are as follows: