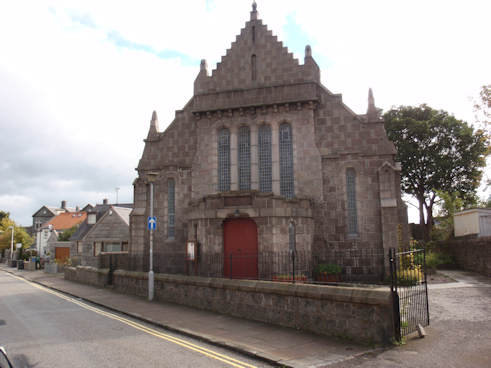 The hall management committee is keen to see the hall become a focal point for community life in Old Aberdeen.

The hall now boasts a state - of - the -art- kitchen designed to ensure that food is prepared and served under the most hygienic conditions; there is a splendid cooker comprising a double - oven and five- position hob, a large fridge-freezer and a dishwasher which does the job in two minutes.

Venues to which the public have access are often judged by the standard of their toilets. The new Dunbar Street facilities will stand up to any scrutiny.

New lighting and neutral decoration have greatly brightened the main hall and also created a sense of spaciousness. The rear hall - named the Leslie Room in acknowledgement of the generosity of the Misses Lamond, Isabella Jane and Helen Leslie of Powis who in 1886 granted the feu charter which enabled the building to be erected - was refurbished a few years ago. The enlarged kitchen has resulted in some loss of space in this room. It, nevertheless, makes a fine venue for meetings, lunches, etc. It has also provided a new home for meetings of the Kirk Session.

The refurbished hall has been given a resounding commendation by the regular users. However to ensure that the hall pays its way new bookings would be welcomed.

The Dunbar Street Hall This hall in Old Aberdeen, is regarded by many as the church hall of St Machar's Cathedral. However, unlike the church, gatehouses and manse, this handsome Victorian building is not vested in the General Trustees of the Church of Scotland. The hall and Cathedral have been inextricably linked ever since the building was erected in the late 19th century. In March, 1886 a Feu Charter was granted by the Commissioners for the Misses Lamond, Isabella Jane and Helen Leslie of Powis, in favour of the Rev. Dr. George Jamieson and the Rev. John Calder, ministers of the First and Collegiate charges respectively of the Parish of Oldmachar, and Robert Donald, miller and farmer, the senior lay member of the Kirk Session 'and their several successors in office for the time being'.

These three gentlemen and their successors in office were to be trustees ex-officio. Eight men named and designated in the Feu Charter (women were not generally deemed suitable for public office and could not hold office in the Kirk in those days) were also trustees. When one of those trustees retired or died, a replacement had to be elected at a meeting of the communicant members of the congregation. Responsibility for the title to the hall still lies with these trustees.

A 1987 view on the 1886 Feu Charter by the then Hall Convener. A recent examination of the Feu Charter of the hall, dated 1886, makes it clear that (contrary to popular belief) the hall belongs to the Church and is intended for Church of Scotland purposes, and specifically for 'Bible Classes, Sunday Schools, Mission Meetings, young men's and young women's Guild Meetings, Ladies' working parties, choir practisings, concerts, Lectures, and Soirees or Social Meetings'.

The Charter is equally clear as to what the site is not to be used for: stone quarries, sand pits, tanneries, breweries, distilleries, crackling houses, slaughterhouses, soap works or glue works, nauseous chemical factories or noxious manufactures...all these are strictly prohibited!

The Parish in 1886 extended from St Peter's Cemetery and Bedford Road northwards between the railway line and the sea across the River Don, embracing Oldmachar parish north of the river except a small area at Grandholm Mills, in Woodside parish. Looking north from that cemetery there were only farms, fields and sea links. The only housing was along and about the Spital and High Street. Scarcely a house existed on the line of King Street with small settlements at Don Street and Seaton. The only large industrial centres were Gordon's Mills and Grandholm Mills on the Don.

On 3 Sept 1888 we learn that the Young Women's Guild have paid up £1 2/- as their share of the expenses of Dunbar St Hall since its opening.

Six years later the Session had become used to supporting the Hall, the minute of 17 Dec 1894. Donation of £6.6/-, usual donation towards running costs of Dunbar Street Hall.

From the Aberdeen Daily Journal of Wednesday, 12 Nov 1919. 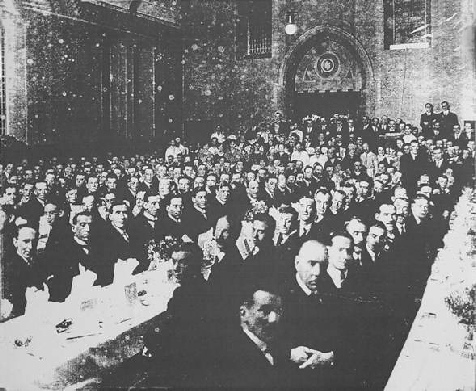 An enjoyable entertainment was given last evening to a company of over 300 demobilised Service men in the hall of Oldmachar Cathedral by the ladies of that congregation, who have been most assiduous during the war and since the signing of the armistice in looking after the welfare and comfort of the Service men connected with the congregation.

The Chairman said they represented that gallant band of 624 associated with Oldmachar Cathedral, who went forth to do their bit for the country. Alas, they mourned the loss of 83 of their comrades, and the Cathedral was to perpetuate their memory on its ancient walls, so that their names might be handed down to coming generations.

An excellent supper was admirably served by a large number of ladies of the committee. A varied programme of entertainment followed, the music arranged by Miss Skakle and amusing sketches performed by the Misses Janet, Mary and Maggie Skakle".

Their brother, Capt. Hugh Philip Skakle MA., BD., assistant minister at St Michael's Church, Dumfries, died in France in 1917 while serving with the 4th Battln. Gordon Highlanders. His name is recorded on the Cathedral War Memorial.

The Parish in 1932 was as in 1886 but missing the High Street, College Bounds and Spital area, which since 1929, was the new Church of Scotland parish of St Mary's, centred on the High Street. The Orchard Street, Pittodrie area was now built-up, and Council housing schemes arising at Linksfield, School Road and Seaton. House-building was also going on at the Bridge of Don where the new military barracks was taking shape. In 1934, that part of St Machar's parish between King Street and the sea was given over to the Church of Scotland Extension Charge, Pittodrie Church. Some years after the closure of St Mary's in the High Street in 1943, Pittodrie Church adopted the name St Mary's.

ST.MACHAR'S HALL in 1932-33 from a parish profile. The St. Machar's Hall is administered by a Trust, elected by the congregation.

The Trustees meet early in September with representatives of the various Organisations using the Hall, and allocate the various Halls for the winter session. Committees of the Trustees look after the repair, cleaning, etc. of the Hall, and the allocation of the building for special occasions. The Hall Keepers are Mr. and Mrs. Niven, 11 Dunbar Street.

No charge for the Hall is made, but Organisations are expected to give a minimum donation of £2 towards the up-keep of the Hall.

The Hall is occupied on Wednesday afternoons during the year by the Old Aberdeen Centre for Mother and Child Welfare, and a donation of £15 is received for this from the Health authorities. The Savings Bank, which meets on Thursday evenings in the Small Hall, is under the care of Mr. A. Leonard, 16, Don Street. The Hall is so constantly occupied that outside bodies but rarely use it. An exception is the St. Mary's Church, which holds its Sale of Work there in December each year. 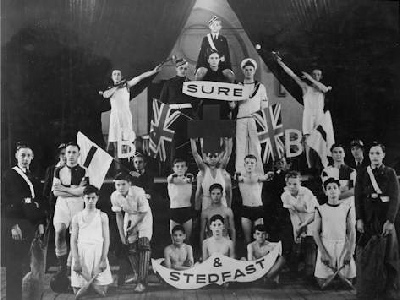 The Parish in 1985 saw an expansion of housing in the Bridge of Don area and we transferred the activities of the youth organisations, (Boys' Brigade, Junior Boys' Brigade, Girls' Brigade and some Sunday Schools) there, meeting at various premises, mostly school halls. These organisations thrived but the result was that Dunbar Street Hall was underused. With the setting up of St Columba's Church in the parish area north of the River Don, our youth groups transferred there and our parish area was much reduced. It now comprises that strip of land between Bedford Road/Tillydrone Avenue and King Street, from the River Don in the north to St Peter's Cemetery. The parish area is dominated by the University of Aberdeen buildings and student hostels, the resident population is small in number, most of the congregation living outwith the parish.

Fifteen years ago, what was going on in the Hall? In October 1996, a sale of books, records, tapes with teas and coffees; in the November a Christmas Mini Market, crafts, Christmas decorations, cards, wrappings, home baking, candy, preserves, curiosity stall, Cathedral souvenirs etc.; and on 1st February 1997 a Burns' Ceilidh Dance. 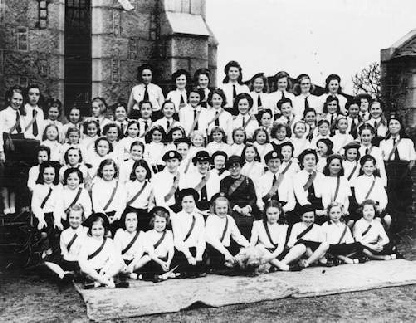 When the Hall opened in 1886 the large hall had a stage at the east end and a gallery on the west, with small rooms beneath the gallery. This hall had a high pitched ceiling with open rafters at the wall-head. It must have been costly to heat. Behind the stage was a small hall with a moveable partition allowing use as one or two rooms. The original pine floor in the large hall did yeoman service until replaced about 1951. By 1974 the hall was showing its age and major alterations were made. A suspended ceiling was installed and a wall constructed in front of the gallery. Improvements have continued to be made to bring the hall up to modern standards and fit for use as a Community Hall. In the most recent round of alterations the Hall Trustees received a substantial donation from the Old Aberdeen Community Council.