The Medieval Diocese of Aberdeen consisted of over 100 parishes; the revenues of some parishes supported the Canons of the Cathedral Chapter, made up by the Bishop (St Nicholas parish), Dean (Kirktown of Seaton), Archdeacon (Rayne), Chanter(Auchterless), Treasurer (Birse), Chancellor (Daviot) and 23 Canons all residing in the Chanonry, the street in which the Cathedral still stands.

Plan of Old Aberdeen from Rev. James Gordon's description of both towns of Aberdeen, 1661. 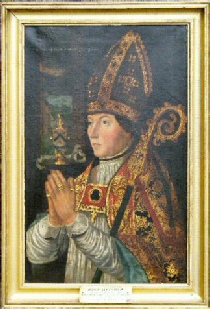 Elphinstone was born in Glasgow, the son of a clergyman. He studied in Glasgow and Paris and taught Canon Law. As well as being a clergyman he was also Chancellor of Scotland. On succeeding to the See he instituted a number of reforms, renovating church buildings and refining liturgical practice. He produced the first printed liturgical book in Scotland, the Aberdeen Breviary of 1510.

He built the central tower of the Cathedral and installed a peal of 14 bells. He also made preparations for the building of the first stone bridge over the River Dee. He founded the University of Aberdeen in 1495 and built King's College. In 1513 he was nominated Archbishop of St Andrews but never took office.

When William Elphinstone produced one of the first printed books in Scotland, the Aberdeen Breviary of 1510, no doubt many people were sceptical about the new technology of printing. It might have been seen as a force for good or ill. No doubt Elphinstone saw that this new technology could be used for noble ends. By the end of the seventeenth century, following the Scottish Reformation, there was a school in every parish in Scotland and levels of literacy were amongst the highest in Europe.

Today, people view the new technology of the Internet with probably the same kind of suspicion but we dare not bury our heads in the sand in the hope that a technology which can be used for ill might go away. Instead we should follow the spirit of Elphinstone and recognise the medium of the Internet as a potential force for good. 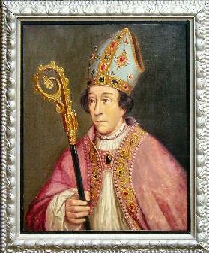 Dunbar continued the good works of Elphinstone, seeing the completion of the Bridge of Dee and endowing and expanding the activities of the University. He also gave to the Cathedral its magnificient heraldic ceiling, a triumph of Renaissance architecture which is still in place. He also erected the distinctive twin stone spires.

The Building Bishops of St Machar’s